Last week I completed reading a book ‘Dongri to Dubai’ by S. Hussain Zaidi; a book on six decades of Mumbai Mafia and the ultimate history of Mumbai underworld. According to the book, the writer is a Mumbai based journalist, a veteran of investigative, crime, and terror reporting in Mumbai media.

The book portrays the story of notorious gangsters like Haji Mastan, Karim Lala, Varadarajn Mudalir, Chhota Rajan, Abu Salem, and many more. But above all it is a story of a young boy from Dongri (an area of South Mumbai) who went awry despite having a father in Police force. The boy was none other than Dawood Kaskar Ibrahim. Dawood was brought into the crime and underworld as a pawn in the hands of Mumbai police and went on to wipe out the competition. So eventually he became the Mumbai police’s own arch-enemy. Dawood, leader of the infamous criminal syndicate D Company, dubbed as a global terrorist by US Treasury Department, a boy from Dongri became a don in Dubai.

It is considered that his mind is the most cunning one of all the gangsters in the world. The story captures his bravado, cunningness, focus, ambition, and lust for power in a gripping narrative (The words behind the book).

It is the best book I have read till now in the world of crime, as it is my first one on this subject 🙂 . But I can surely recommend to all of you to read this book. It is the book which is now a major motion picture ‘Shootout at Wadala’ (Bollywood – Indian Cinema).  So for all you book lovers keep reading and live healthy. 🙂

Hello all blogizens (I hope I am the first one to use this word). Hope you all are happy and healthy in your lives!

I have been away from blogging for a long time (approx. 2 months). In these 2 months many things have changed around the world and in my life. Change is necessary and constant. Some change is for the betterment and some lead us to the destruction of our society. Technology is changing with latest gadgets and innovations. World politics is changing with the entire Crimea-Ukraine-Russia thing, India (biggest democracy) going through their general elections. The virtual world of Internet has made us look and feel how small the real world is, BUT missing of MH370 brought humans on their feet making them feel how large and great and lengthy the real geographical world is? And now the world will be taking part in the biggest extravagance i.e., The Football World-Cup’ 14 (Brasil) in coming months.

For me, the changes were real fast and quick within these 2 months which took me away from blogging. First it was going through SSB (Service Selection Board) for selection in Indian Navy which was a different experience than regular civilian life. Cleared it but got rejected for one physical issue (Because of my eyes ;-)). The strict regime within the armed forces and staying 10 days within that regime which one is not used to and getting fit into that daily routine; that I call a change in an individual’s life. After that another change was to go for my project training in a MNC, sit at one same place every day and work. I used to get Saturdays and Sundays off but during those days I had to go to college on some days or my parents used to give me some household work. So these were the changes which kept me off my blog.

But now I am back. I hope I’ll be able to write at least one post each week. And reading all your accumulated posts will be fun. Have a great and shiny week ahead. 🙂

Hello friends. I wish you all a very happy, prosperous, warm and a healthy new year! May God bless with you all the happiness in the world! So how was your New Year’s Eve? I hope you all had a lot of fun partying hard.

This New Year embarked the starting of a new journey in my life. Till now being a college student had a very much different life; but now the life has changed. There is a professional career ahead which is not at all same as previous life. Previously there was fun in class, late assignment submissions, bunks, and the whole air was filled with madness; but now there would be professional environment, strict deadlines, and a reformation in life.

I got campus placed at a MNC in I.T industry and its training started from January 2nd, 2014. When I entered the premises it was a whole different scenario then the university. I thought how we would be able to fit in this environment? How we would be able to work with such a strict regime? But change is inevitable and all the change work in favor of oneself.

The idea of being a professional and the environment around gave goose bumps to me. Looking around and all one can see is guys working silently and talking nothing but work. During lunch time one of my friend said seeing so much people around during lunch gave him a feeling of ‘Shawshank Redemption’. 🙂

But still it is fun to be a part of such a professional environment. The guys there too had fun but in a different manner then we had in college. Still it was great and the experience of the first two days was not much as we were not assigned our project. But I am sure we will not be having an inch of time whenever we are assigned with our work. Cannot wait to start and be a part of such an environment. Hoping for the best.

Hope Springs Eternal! Have a great week ahead. 🙂

Hello friends! I hope all of you are enjoying your Christmas with lots of fun being a secret Santa, praying, eating goodies and having a family time. I wish all of you a Merry Christmas. May the Christ answers to all your prayers and brings happiness to your lives!

Yesterday I remember reading an article with title ‘Why Failure Drives Innovation’. I was so taken into by this article that I thought of sharing this with all of you. Failure – Nobody wants to be a failure. Everyone wants to succeed and never want to see the face of failure. Some people fear of failure and some rise with each and every failure they see and get.

As this article talks about the failure and how it drives the innovation process; it shows how to overcome from the mindset of fear of making mistakes. The writer describes how people view failure. For this purpose he describes people of two mindsets. The type 1 mindset is fearful of making mistakes. The type 2 mindset is fearful of losing out on opportunities.

Go ahead and read the article and the link of which is provided below. Have a Happy Holidays! 🙂

Hello friends. How was your week? I hope you all had a lot of fun.

I had been watching The Big Bang Theory from last two weeks and just finished its Season 5. While watching the series it made me realize how science can be fun if taught in this manner. Although the sole purpose of this series is not just keep mocking the science but also mocking the life. But still it is fun in itself with Sheldon Cooper, a theoretical physicist who thinks himself as incorrigible; Leonard Hofstader, an experimental physicist who is a blend of a nerd guy and a common boyfriend; Howard Wolowithz, an engineer, an astronaut and a thin Jew; and last but not the least Rajesh Koothrapalli, an astrophysicist who is a rich, lonely Indian guy who cannot talk to girls. And not to forget the mocking of Chuck Lorre.

What if a different series is made where these guys just teach science and technology with all this fun they have during their conversations. They can bring in renowned scientists like Stephen Hawking with whom other people can interact. The whole show can be of half an hour where 20 minutes can be of fun with all the four guys and last 10 minutes can be of interaction. This is nothing but just a mere idea.

Science and technology is part of today’s world and no one can deny it. With such a series science can reach to masses which will prove to be helpful towards humanity. Like in some episodes Sheldon Cooper records his video of Fun with Flags, in the same way it could be Fun with Science & Technology with the Big Bang Theory. It could help to change the thinking and ideology of the society.

Hope someone comes with a great idea for such a series. And do not forget to include me. 😀 Just Joking.

Have a great and frolic week ahead.

Nelson Mandela, a man who was an epic in himself. A man with bold thoughts and actions without any violence.

Nelson Mandela, born on July 18, 1918 was a man with Gandhian ideology. I myself never saw Gandhi but whenever I used to watch Mandela he as Mahatma Gandhi came into my mind. The man who was imprisoned for life for his fellow countryman, who just fought against racism and for freedom was none less than Mahatma Gandhi for the entire world.

I cannot write much as all the words in the dictionary cannot match his actions of the entire life. His actions have been much more inspiring than the words anyone could write. A Nobel Laureate, President, and above all a great human being.

May his soul Rest In Peace and may his ideology makes home in every person’s mind and heart.

The only thing constant in life is CHANGE. But this change hurts a lot. Now there would be no more bunking the class and playing cricket, no loads of PJs, no more fun in class, no more management of college events, no more staying in the college and preparing for the events. Can’t imagine my life without all these.
A new life starts from here. I wish all of my friends a grt and a frolic life ahead with all the happiness. 🙂 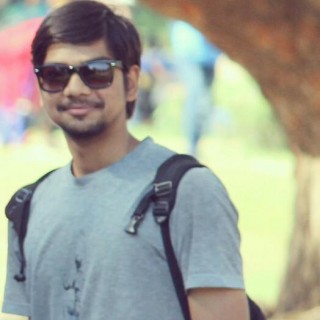